I’ve tried making these before, and although they always tasted good, the texture left a lot to be desired. Tasty hockey pucks come to mind. I know that with the huge proliferation of them in the shops, I really do not need to make my own, but that fruited spiced smell wafting through the house as they rise and then bake is…well it’s on equal footing with the Christmas cake for me.

Having had a lot of success with Paul Hollywood’s breads, and rolls, I decided to go with his recipe. Goodness me it seemed to take forever.

Oh they were good though. A bit more dense by the next day but still good.

Purely in the interests of Science (mostly) Tex suggested I also bake Delia Smith’s recipe. Well why not, says I? After all, I’ve got a lot of fruit and peels to use up, and it’s Easter, and we all like some hot bun action.

Delia’s seemed to come together faster, though I did have to add extra flour. Her 450g was just too wet, so I made it up to 500g.

Also very good, and they seemed to rise and round out more and stayed softer overnight.

I think I’ll probably do an amalgamation of the two recipes next year. Most of Paul’s ingredients (minus the apple and the orange zest) and Delia’s method (with my own additions), though her yeast measurement works a treat, so that stays.

80g chopped mixed peel (whole peels are much MUCH nicer. Just dip them in flour to make them easier to chop finely. I get mine from here.)

(I used a stand mixer, I fully admit it.)

First tip the flour into a large mixing bowl and add the salt, yeast, mixed spice and cinnamon then give it a good mix.

Add the caster sugar followed by the sultanas and candied peel then mix these dry ingredients together and make a well in the centre.

Next add the butter and pour the hand-hot milk and the hand-hot water over the butter followed by the beaten egg. Now mix everything to a dough, starting with a spatula and finishing with your hands until it is all combined, evenly mixed and leaves the bowl clean. Add a spot more milk if it needs it. (I used the dough hook on low so that nothing splashed out of the bowl)

Next cover the bowl with a polythene bag (I used a shower cap) and leave it at room temperature to rise – it will take about 1½ hours to 2 hours to double its original volume.

Turn the dough out on to a clean work surface (you shouldn’t need any flour) and press out the air.

Now divide the mixture into twelve using a palette knife. (I weighed each piece as I’m like that)

Take one piece of the dough and shape it into a round then roll it between the fingers of each hand, keeping your hands flat, to form a fairly smooth round ball (this should only take about 10 seconds or so) then do the same with the remaining pieces of dough.

This video helps a lot!

Arrange them on the lined or greased baking sheet (allowing plenty of room for expansion).

Leave them to rise once more inside a large, lightly greased polythene bag for 45 minutes to an hour, or again until about double the size.

Make up the paste, and put into either a small piping bag or a plastic bag that you can cut the corner off.

This video shows it much more clearly than I can explain it. It also seems to be the most sensible one I’ve seen. All the others cut the tip off the bag and then filled it. That’s a very good way to get paste everywhere before you even start. 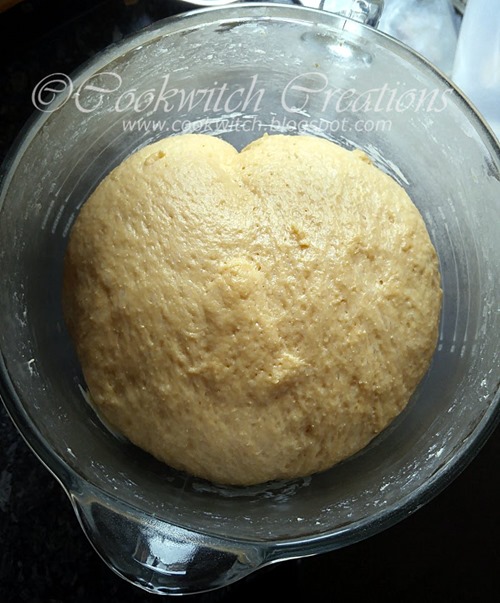 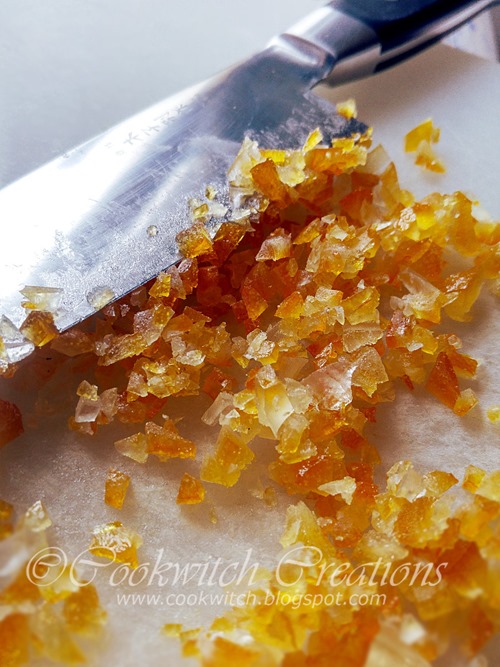 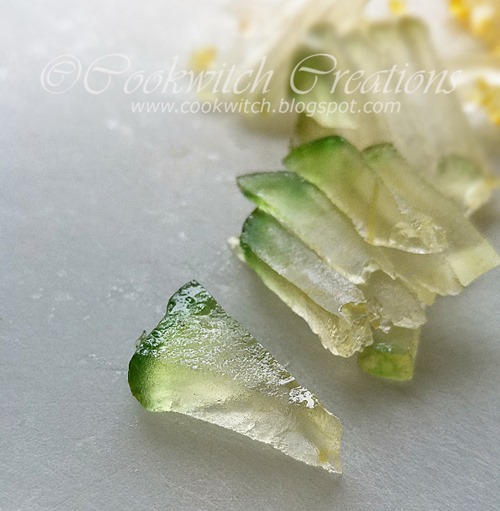 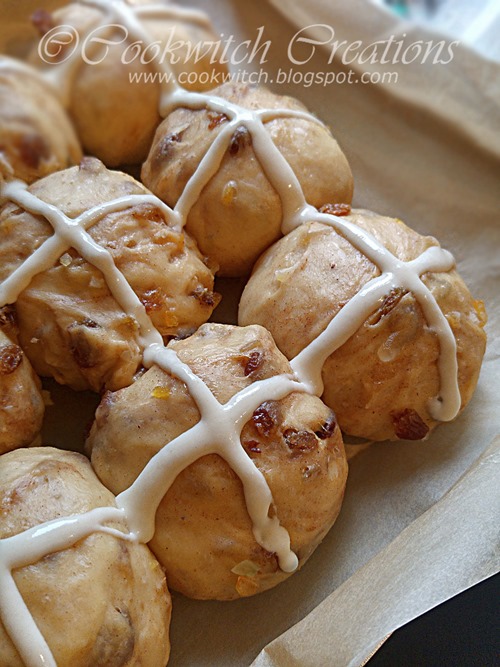 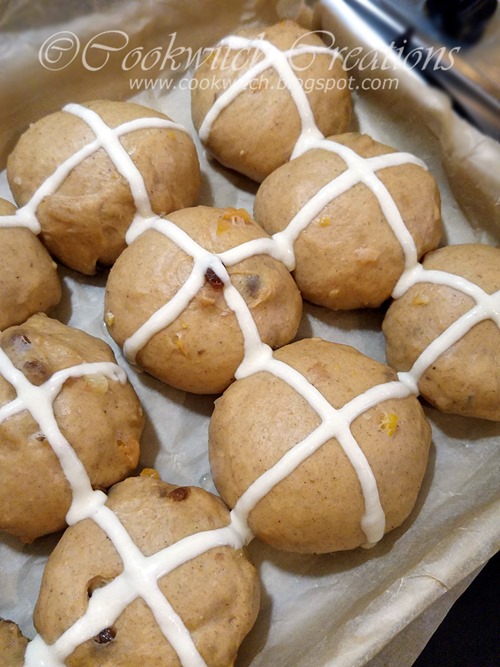 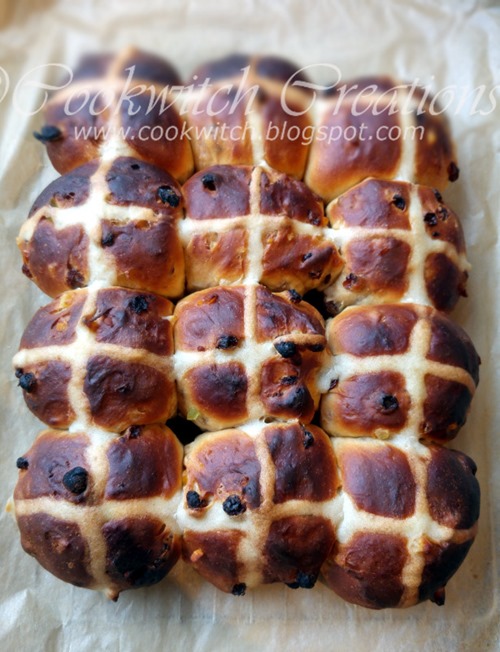 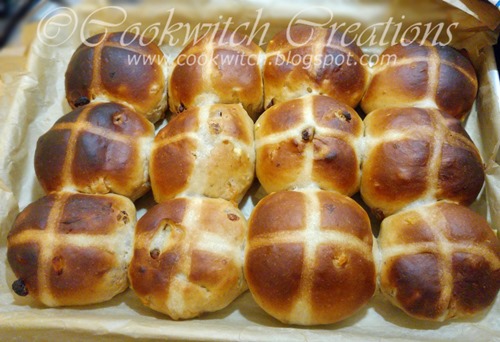 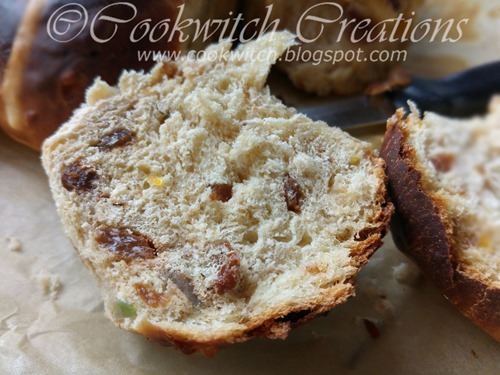 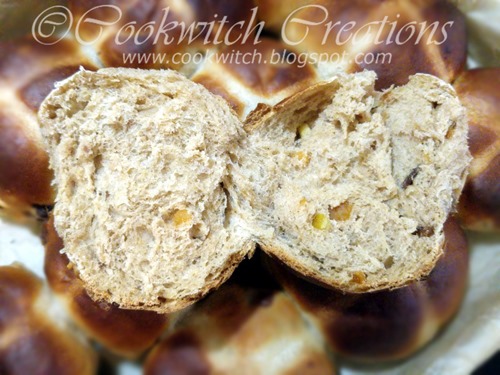