As you turn into Crawford Street, a waft of scented shisha smoke greets you gently. I love that smell, because you know that, pretty much, there will always be very good food indeed nearby.

I have a bit* of a love affair with scents and tastes of Middle Eastern food. Cyprus was invaded by everyone, so our foods have a lot of Arab and Moorish influences, and some of the words used in Cypriot Greek still hark back to those occupations**, so when Mum moved to North Cyprus I was excited to be able to learn even more about the foods from the Turkish table. It’s a vast cuisine. Turkey is a nation that straddles Eastern Europe and western Asia with cultural connections to ancient Greek, Persian, Roman, Byzantine and Ottoman empires. Hurrah  says I, because that means even more recipes.

Going back to the short walk along Crawford Street towards Ishtar, the shisha smoke and a smell of hot charcoal on the breeze boded well for the dinner to come. I am very happy to report that I was not mistaken in that view.

From the outside, especially on a dark evening, Ishtar looks warm and welcoming, and it didn’t disappoint. 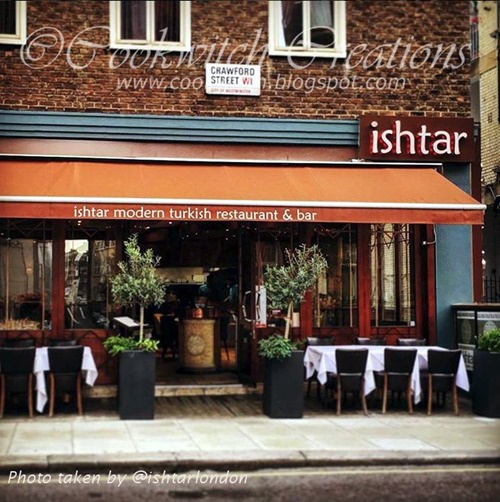 They couldn’t find my booking at first, as it had been booked under Cookwitch, and I’d said my actual name, but even so they just sat me down, fussed over me and made me very welcome, despite not knowing if I even had a booking or not. I was having a clumsy day, and I think I dropped or knocked over at least 3 or 4 things, but the lovely Selin put me at ease.

When my partner arrived, and we were settled with drinks, we perused the menu. Perused in the true sense of the word***.   I know I’ve eaten a lot of Turkish food, but there were some things on the menu that I’d never heard of, which makes me very happy.

Zyuleyha, our very patient waitress, explained anything we didn’t understand, and let us sit and discuss at length what we wanted. The manager, Serhat, came to greet us with smiles and handshakes which, far from being just for us, was how he greeted everyone in the restaurant.  It made us feel truly at home and welcomed.

Eventually we decided on our starters.

Silky smooth houmous and spiced olives were brought out, along with some warmed, nutty tasting wholemeal bread. I managed to avoid my usual pitfall of eating all the bread with the dips, because I definitely wanted to leave room for dessert. 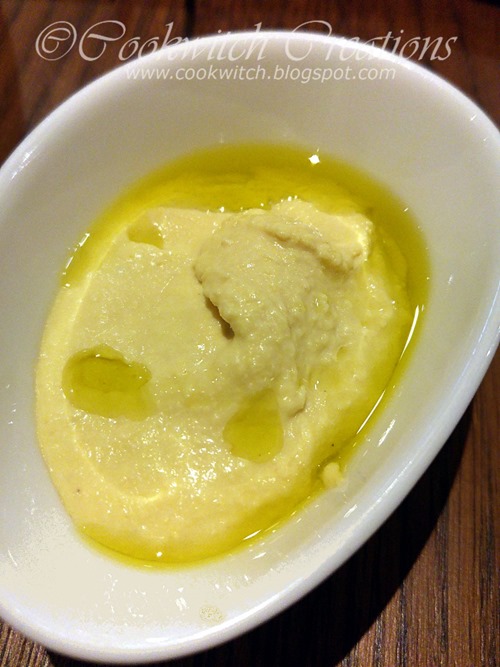 They’d also brought us a dish of kisir, which is a traditional salad that gets brought out at every restaurant meal I’ve had in Cyprus. The main ingredients are bulghur wheat, parsley, and tomato paste but it can be quite spicy, too. Ours had tangy, sticky pomegranate molasses, spring onions and lemon and, to my relief, no chilli. This one was more rich than others I’ve had, and I thought it was actually far better than most. The addition of a dark puddle of the molasses just made for a brilliant contrast of flavour against the smooth richness of the tomato paste. 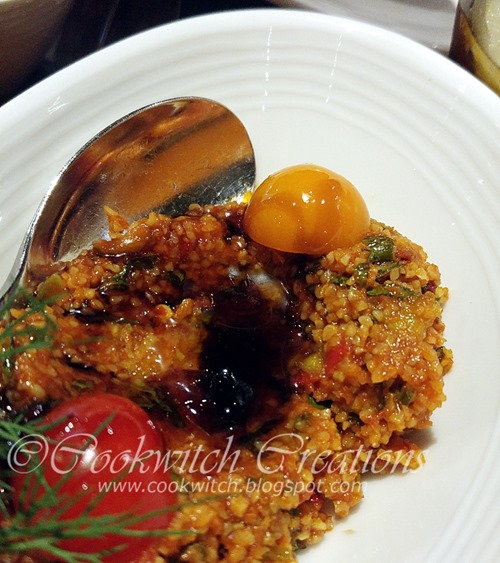 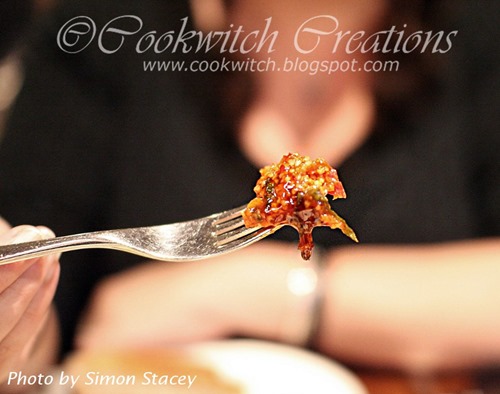 Patlican ezme for me, because I am a total fool for aubergine.  This is a dish of chopped, smoked aubergine, garlic and yoghurt. It wasn’t at all overpowering, and had a pleasant woodsmoke background note from the aubergine. Mixed in with very creamy yoghurt, and with a nice hit of garlic – but not too much. 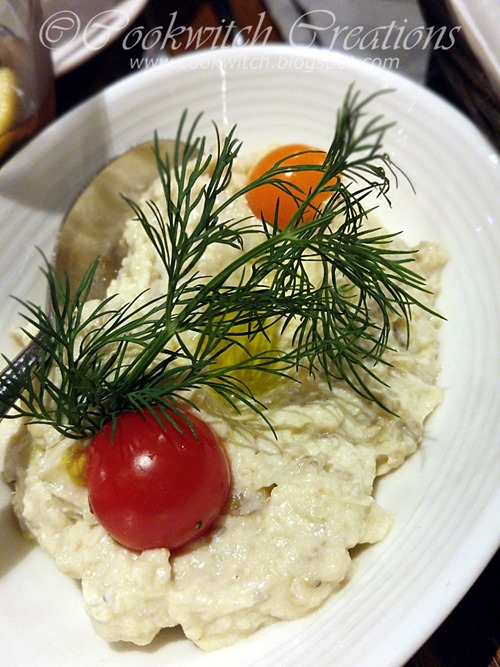 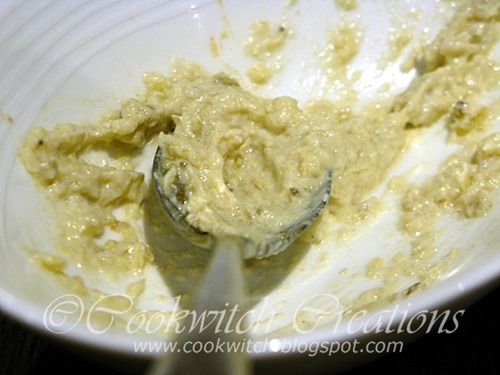 This was a dish I could have eaten all on its own, with a large spoon and some bread. In fact, I did, so here is a photo of the almost empty bowl.

Kalamar for Simon, which was large pieces of very tender and fresh tasting squid, beautifully crumbed, and sautéed in garlic and parsley with their house tartare sauce. (At this point we discovered that the knives felt really odd when we used them. The handle is aligned horizontally to the blade, so keeps feeling like you are holding it the wrong way, when  in fact you aren’t. If you hold it the way that feels right, the blade is actually on its side, and turns in your hand very easily.) 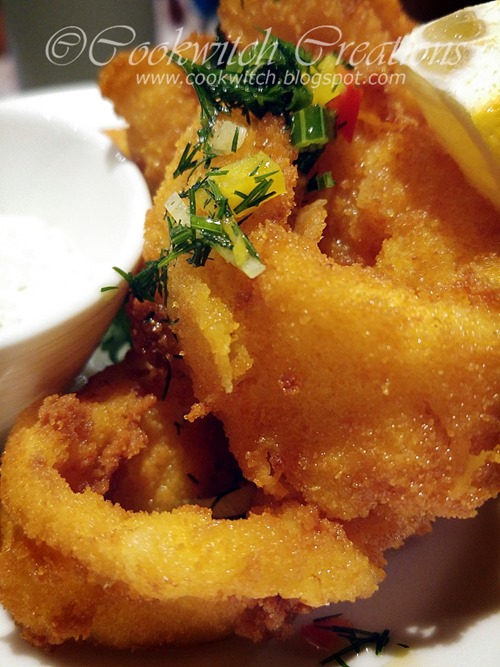 Choosing a main was even more difficult, and I was sorely tempted by stuffed chicken with chestnut sauce, and flank steak on smoked aubergine, but eventually I went for Meyveli Kuzu; lamb poached with apricots and pears, served over couscous. (It was actually served over bulghur wheat, which I prefer to couscous anyway.) This is an Ottoman dish, more redolent of what might be cooked at home. The lamb pieces needed no knife, you could just split them with your fork. There were flaked almonds in amongst the pears, apricots and prunes, and their bittersweet, toasted flavour lightly scented everything. As a true almond lover, this made every mouthful a little piece of heaven, and I think I zoned out for a while each time I ate a forkful. Yes it has sweet overtones, but it is still a savoury dish. There was enough fruit to add balance, but it didn’t overpower. 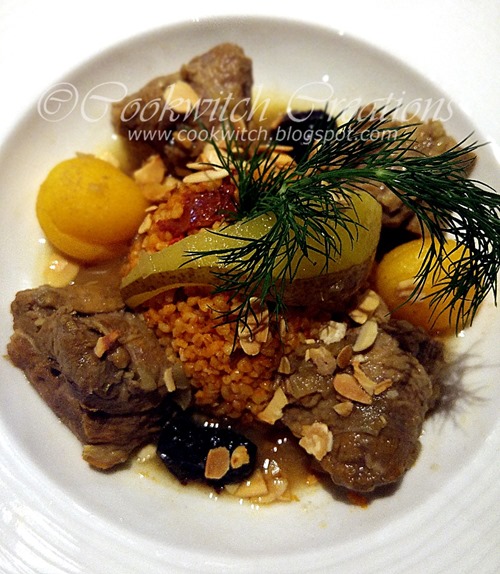 Simon decided on kofte with garlic yoghurt and bulghur wheat, served on a very thin piece of flatbread that caught any meat juices. I tasted a bit, and while they were spiced, and very meaty, they retained a light, slightly crumbly texture, and were still juicy. 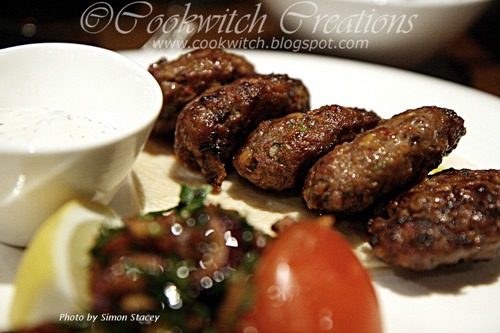 Dessert…well…there was only one choice for me, and that was their speciality of kunefe. This is the Turkish variant of the pastry kanafeh, and the wiry pastry shreds are called tel kadayıf. You often see them wrapped around a nut and cinnamon mixture, looking like miniature Dougal dogs.

A semi-soft cheese such as Urfa peyniri (cheese of Urfa) or Hatay peyniri (cheese of Hatay), is used in the filling. The kadayıf pastry is not rolled around the cheese; instead, cheese is put in between two layers of kadayıf. It is cooked in small copper plates, and then served very hot in syrup with clotted cream (kaymak) and topped with pistachios or walnuts. It doesn’t sound like it would work, but it really does. The cheese had such a clean, fresh taste, that it contrasted perfectly with the sweet, crisp, buttery shreds. It also wasn’t overly sweet, which was a boon for me. I’m not a huge fan of sugar syrups on pastries, preferring them to be light and crisp with a bit of sweetness, not a full on sugar hit. This one did not disappoint. The ice cream that came with it was a good vanilla, and there were three pieces of fruit on there too that gave a lovely hit of sharpness after you’d finished the kunefe. 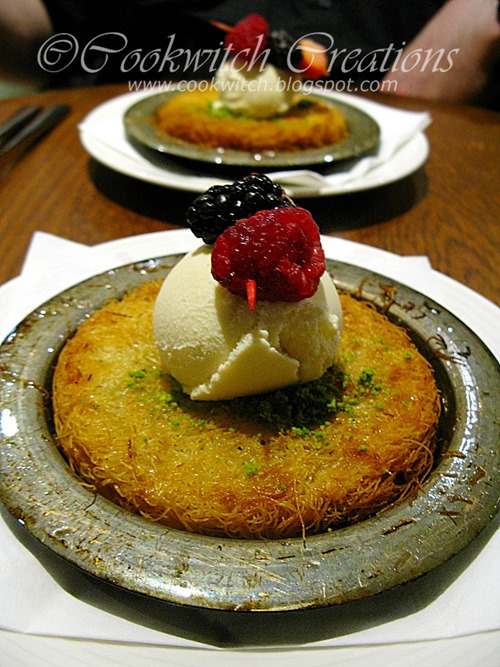 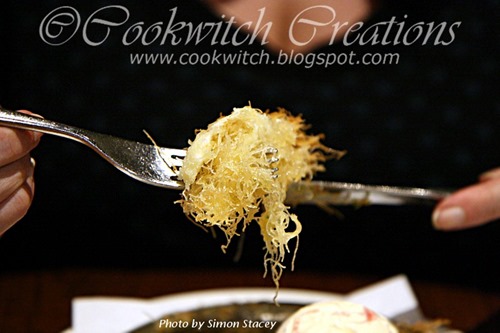 All in all, I will say that this was a really lovely, and delicious, evening out, and one that we will absolutely repeat, because we want to go back and work our way through the rest of the menu.

Thank you to Serhat, Selin and Zyuleyha for making it a perfect evening.

http://www.ishtarrestaurant.com/ (this has auto starting sound)

Disclosure: We ate as guests of Ishtar.

*understatement of the decade

*** peruse verb formal  – to read (something), typically in a thorough or careful way.