For some reason, I had decided that I was going to make my own tofu. No I have no idea why, but I just fancied having a go, so I did. This is what happens when I am left on my own at home for any length of time with access to an online supermarket.

All things considered (me being a tofu making novice) for a first attempt, and for an attempt that didn’t have a tofu press in it, or any nigari with which to coagulate said tofu, I think I did ok.  If you did this kind of thing regularly, as I know quite a few people do, then it would be much faster as you would know what you are doing, and what to expect. For me it was a day of experimentation, blenders, large pots, rubber gloves, balancing acts and spillages, but we got there in the end. More or less.

To start off, you will need a blender as you have to blend the soaked soy beans to extract their milk. I don’t think that a food processor will get the beans fine enough. I dug the huge glass beast out from its place under the counter, next to the plastic bag storage box, and washed off the dust and cobwebs. Poor neglected thing.

I soaked the beans overnight in the 4 cups of water. DO NOT SALT THEM.

Plastic Tupperware with holes punched in to drain off excess liquid. You could use a bamboo steamer, or one of these, so long as it is lined with the jeycloths. I actually used 2 plastic take out containers, one with holes made with a corkscrew.

My beans had soaked up around a cup of the water, so I added one cup back, and then poured the lot into the blender. It makes quite a satisfying noise.

Blend on low to get started, and then up it by one measure, and leave it running for a good 5 minutes. I noticed that it had separated after that and there was clear liquid at the bottom of the goblet, so ran it for another 5 minutes. It stayed milky after that second run.

I poured the whole lot into a large high sided pot, added half a cup of water to the blender, rinsed the residue out and poured that into the pan too. No bean left behind.

I brought it to a simmer on a medium high heat stirring all the time as it will stick. I did that because a far more learned person than I told me to. The smell of just blended soy beans isn’t dreadfully pleasant, quite astringent, but as you heat and stir everything, the smell changes to a more savoury, almost toasty smell. The mixture will foam up a lot.

I’d already set a colander lined with two large UNUSED jeyclothes over a bowl. The bowl catches the milk, and cloths capture the pulp.

Gently pour the foamy mixture onto the colander, and stir it to get all the milk through. The foam is weird, but it goes.

I wore rubber gloves to do this next bit, as it was hot.

Bring up the corners of the cloths and twist it together so you can squeeze as much liquid out as possible. Keep on squeezing, as the pulp left behind is useful. (I dried it out in a 90C oven for an hour or so until it crumbled, and used it to bind some veggie aubergine meatballs together.)

Eventually you will get bored of squeezing and call it a day.

Rinse the jeycloths, and clean the pot.

Put the milk back in, bring it up to a simmer again – MV says 180F/80C but I do not have a thermometer so when it bubbled all around the edges I called it – and add your coagulant.

The juice of half the lemon got stirred in very well, then the juice from the second half went in and I stirred it in far more gently, moving the spoon in a crosswise motion across and back, up and down, then left it for a good 15 minutes to half an hour.

Everything separated. Hurrah! I ladled it into the prepped Tupperware and watched clear liquid drain off.

Once no more liquid was running out, I folded the cloth over and across it, stood another same sized Tupperware in it, placed that over the plughole in the kitchen sink, and then put two cast iron pots on it to press any last liquid out.

I realise I am lacking in photos of the process after the lemon juice was added. I was in no position to take any, as my hands and I were covered in bean juice, and I was strangely panicked about getting it all done fast.

I’m sorry. I have failed you.

I like my tofu very firm, which is why I used the two pots to press it. I think I left mine pressed for about an hour or so because I forgot about it. Well, look, Nigella was on TV and…

If you plan to make this a lot, then a tofu press is probably a wise idea. It’s best to have a tofu press if, to be honest, you are rather more than partial to neatness and symmetry in your tofu blocks. [raises hand guiltily]

Today I cut it into pieces, dusted it with salt and rice flour, then shallow fried it in vegetable oil along with some red pepper pieces, until it was crisp on all sides. I had shop bought fried onions in a tub, added them to dark soy sauce, and ate it all for lunch. PERFECT! 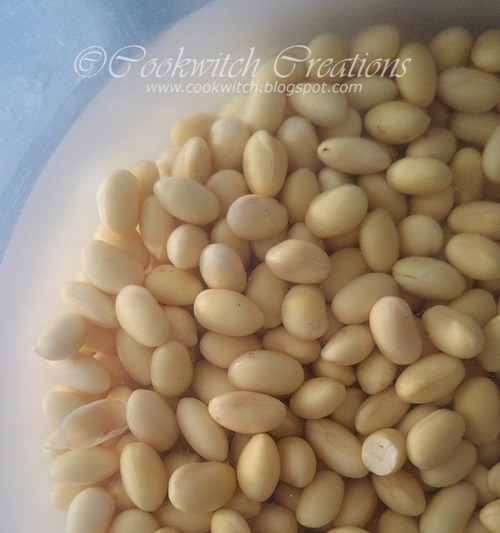 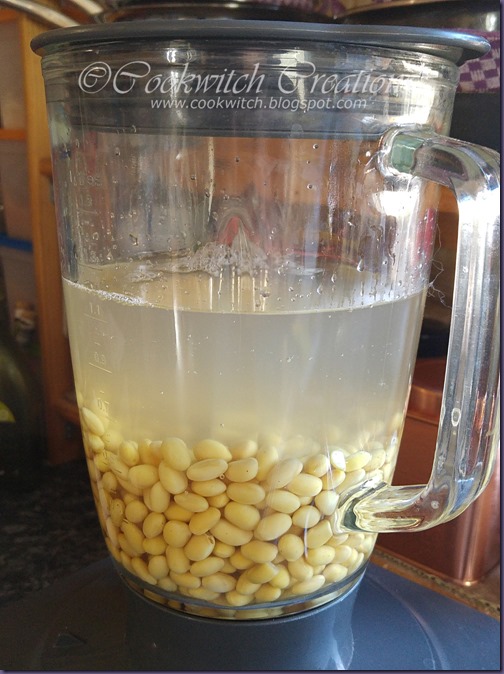 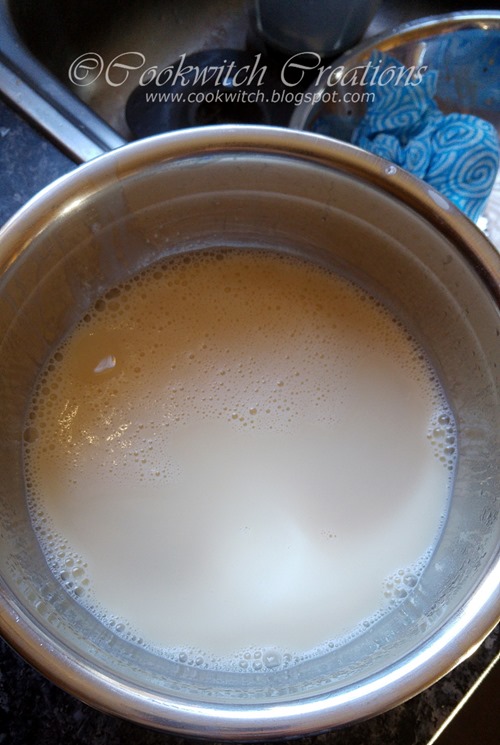 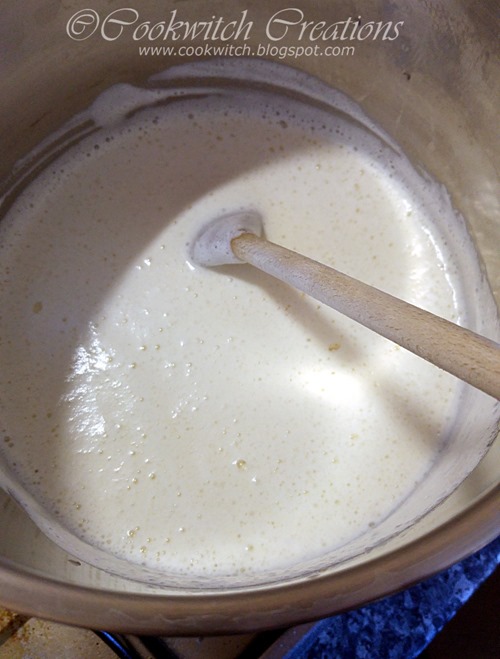 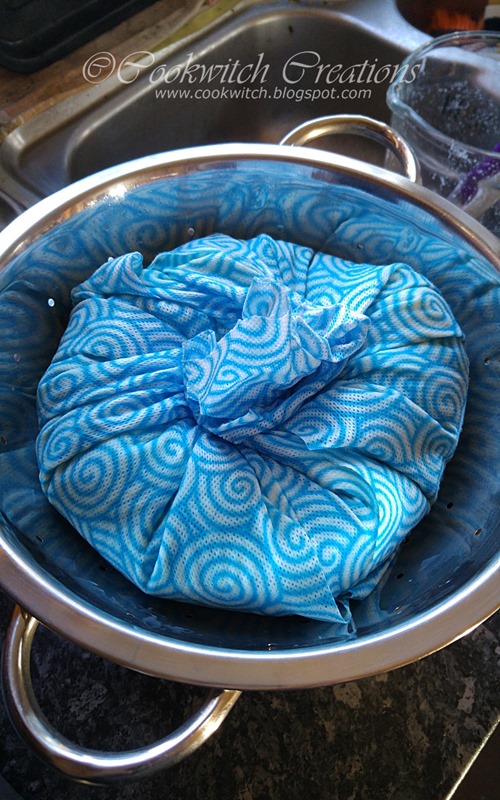 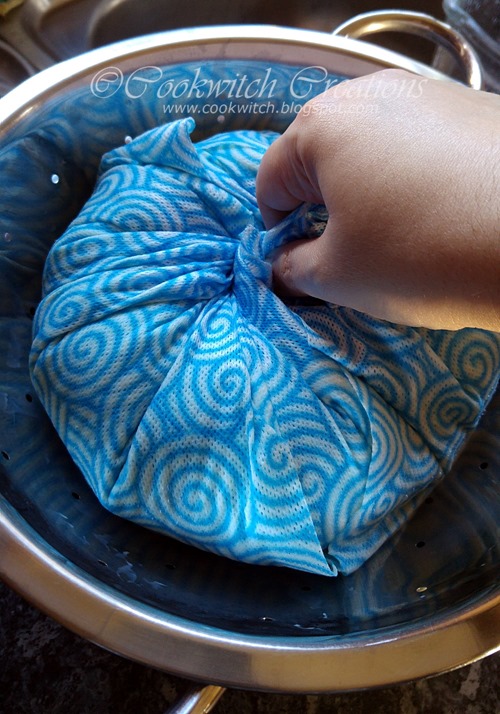 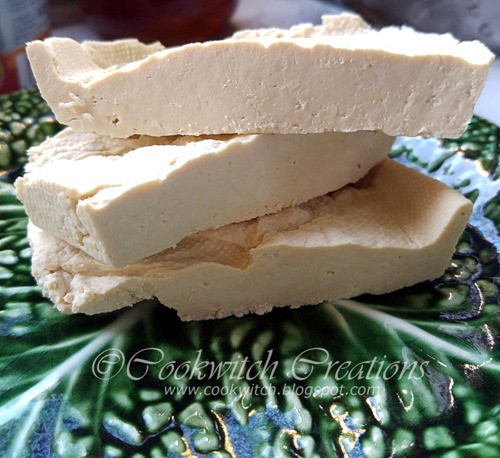 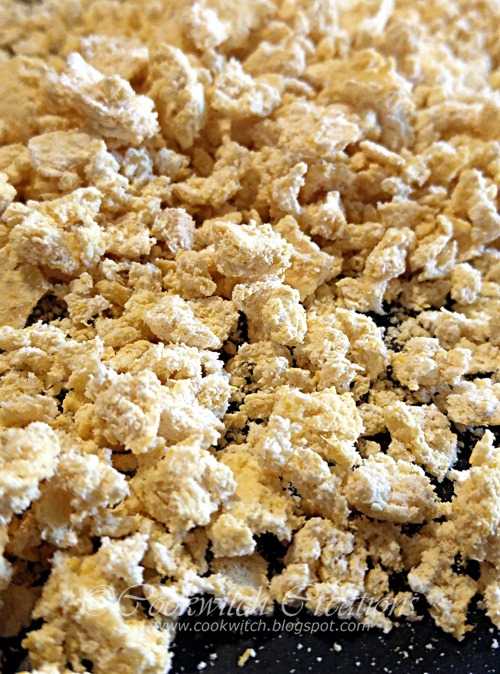 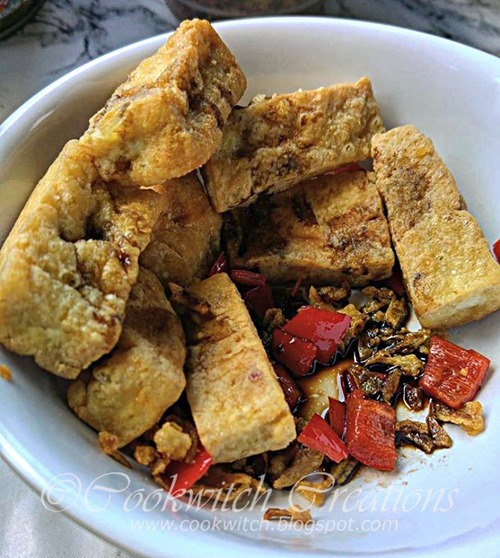