I had booked a Focaccia baking class at Carluccio’s on Garrick Street a while ago, almost the very second I got their emailed newsletter. £20? Yes please!

Tuesday 28th dawned bright and sunny, and I determinedly set off on time, only to be waylaid by a small and very excited yappy-type dog on my way to the bus stop. So I walked him all the way back to his house, where another neighbour was telling his mum that she thought her dog had escaped. Once he realised he was home he ran indoors with lots of tail wagging. Not even a kiss goodbye. I set off again, only pausing to get stuck in traffic on the bus and for the bus driver to stop and give directions to a person that felt it necessary to stop the bus, on the opposite side of the road to the route she wanted, and ask directions to the hospital. There was Much Tutting on our bus.

As it happens, delays notwithstanding, I made it to Carluccio’s by 10.30, as had another lady, so the lovely shop manager took us upstairs to the private function room which had been set out with baking stations, complete with ingredients, bowls and Chef’s whites. I had brought my own apron because chef’s whites rarely cater for ladies who are ample in the chest and hip department. I was glad I did, because I felt far more at home in it.

The Head Chef for Carluccio’s Walton, Kevin, talked us through the plan for the morning, and the lovely Valentina demonstrated the different flours that we might use in Italian cookery. 00 flour is absolutely gorgeous. It’s so finely ground that it glides through your fingers leaving almost no trace. Valentina told us about a Pugliese bread made from semolina flour, which of course I now want to try.

We finished our most excellent coffees, and off we went. I don’t have any photos of this bit, because dough-strewn fingers and a Canon G9 do not mix.

Add the fresh yeast to the lukewarm water. Mix in well with a fork.

Put the 00 flour in the bowl, mix in the fine salt distributing it well with your hands.

Make a well in the middle of the flour.

Add 1/2 the yeasty water and try to bring the dough together, only adding more water a touch at a time. (Flour absorbs moisture, so sometimes you may not need all the water)

Bring the dough into a ball, squashing it down into the bowl to get all the bits mixed in.

Turn it out onto a lightly floured board and knead it just enough to bring it together and gain some smoothness. You do not knead this dough for as long as you do for a traditional white bread dough.

Oil the bowl, oil the dough lightly too.

Place the dough in the bowl, cover and leave to rise in a handy warm corner for an hour.

So we did all that. We didn’t get too messy though my hands got nice and soft from the amount of olive oil I had on them.
We were then given some dough that had been made earlier by Kevin, so had already proved. We were about to be allowed to play with that and make calzone. Valentina had informed us that calzone actually means trousers, which induced some laughter, as filled trousers just sounds wrong. Later on we were told that it could also mean socks, which also didn’t help.

Off we went again. Chef Kevin demonstrated what we had to do, we quaked a bit, and then got on with it.

Tip the dough out into the board, cut off a third, place remainder back in the proving container.

Gently fold the dough under so that it becomes a rounded shape.

Lightly roll out the dough to a circle (ish) roughly 1cm thick.

Heap the ragu or vegetable filling in the middle.

Bring the top half of the circle down over the filling and press your fingers all around the filling, so you can almost feel the board through the dough.

Trim off any excess and then crimp the edges. I cannot explain how to do this in writing! I expect you could get away with just crimping the edge with a fork, but they must seal, or the filling will leak out.

Place on some greaseproof paper and send them off to the kitchen!

We bid farewell to the calzone, but we had no time to mourn, because next we made focaccia.

Tip out the remaining two thirds of the dough and press out into whatever shape you fancy. Start pressing at the outside edges and work your way in to the middle so that the middle doesn’t get too thin.

Make deep indentations all over with your fingers, and press in your choice of toppings so that the dough will rise up around them.

Drizzle with olive oil and sprinkle with sea salt.

Then it was off to the kitchens with that too!

We cleaned up and out came the Prosecco. I had the most delicious, icy lemonade instead and Valentina mentioned that there would be a surprise. I had a feeling I knew what the surprise might be, having seen Twitter that morning, but kept very quiet.

The door opened and in came Mr Carluccio himself. I’m not entirely sure that I have smiled so much since I met Tom Baker. Signore Carluccio, you rank right up there with Dr Who for me. One of my food heroes was sat directly in front of me, and I was almost overwhelmed. This isn’t the “OMG he’s famous!” nonsense, because that doesn’t phase me one jot, everyone goes to the loo, right? It’s more the fact that I have watched and listened to and admired this man for so many years via the TV screen that it didn’t feel quite real to have him, literally, within arm’s reach, but we did, and it was absolutely fabulous. 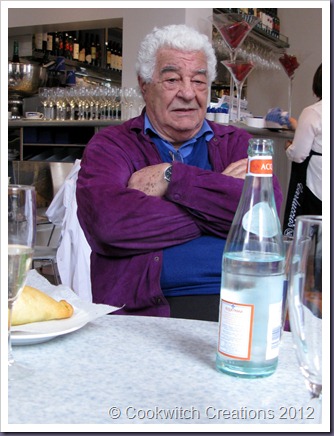 Signore Carluccio. You have NO IDEA how excited I was.

His lovely, long suffering PA, Al, came in briefly but sadly she had to dash off and Do Things so we didn’t really get to meet her properly.

He sat with us for a long time, happily chatting, telling us a fairly colourful joke and sampling the calzone when they came up from the kitchen surrounded by wafts of warm, Italy scented air. The lady whose calzone he sampled was terrified whilst he was eating it, but he said it was very good so she was happy. Poor girl, I’d have been scared too! 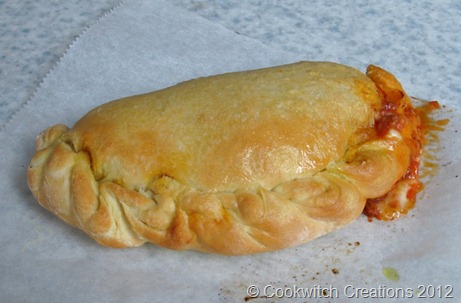 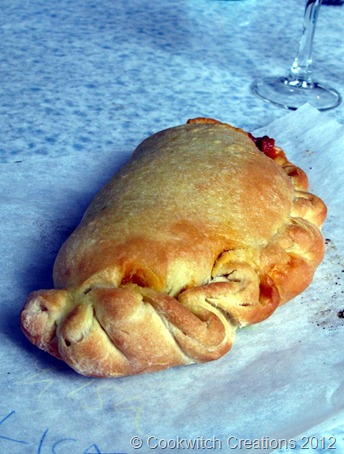 It’s quite difficult to eat a calzone tidily, I will say that now, especially when the filling oozes out of the sides and is still searingly hot, but we managed. I cut mine in half and packed some away for later because I was meeting a friend and I know she would like it.

Then the focaccia arrived. Trays of hot, steaming baked deliciousness. The mixed scents of baked black olives, tomatoes and olive oil soaked rosemary was heavenly. I think we were all very happy with how they had turned out, but really had no room to eat any as we’d just demolished some fairly hefty calzone, so once they had cooled a bit they were photographed, cut in half and wrapped. Then wrapped again. And again. Okay so maybe we had gone overboard a bit with the olive oil, but it was such GOOD oil. 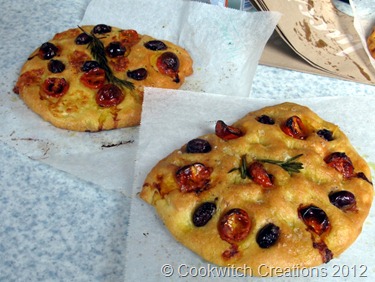 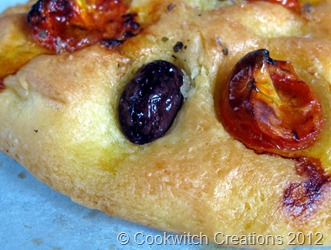 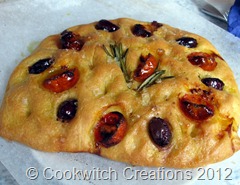 Antonio sat with us for quite a while, and having him just chat with us about cooking, give us tips on recipes and talk about filming Two Greedy Italians is a memory I shall treasure for a long time. He had to leave, so we set about tidying ourselves up, and packing our baked goods away. We were all given goodie bags as well, with a bag of 00 flour, the neatly packed dough we had made and some fresh yeast.

We were joking about taking photos of Antonio – I had managed a surreptitious shot of him while he wasn’t looking – when suddenly Valentina said “Oh shall I go and get him? He won’t mind!” and was gone. Cue most of us going “Oh! Oh my, erm…” and then he was back.

We had lots of photos taken with everyone’s different cameras and phones and I am happy to say I overcame the shyness that was eating at me, and asked Chef Kevin to take a photo with my camera too please if it isn’t too much trouble ta ever so. 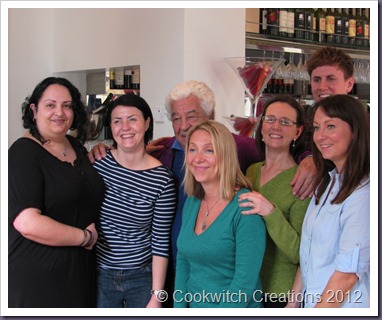 I got to one arm hug Mr Carluccio as well (his jacket was made of the softest material EVER and I didn’t want to let go) and then he really did have to depart, leaving in his eminent wake a bunch of ever so slightly shell shocked cooks saying to each other variations on “Did that just…I mean…we…He came in and…oh my.”

I have to say a huge thanks to Carluccio’s for organising the event, and making it possible. It would have been a lovely day anyway, even without the addition of a cheeky Italian man, but that pretty much put the icing on the already very good cake.

3 thoughts on “Calzone, focaccia and all kinds of wonderful.”