A few weeks ago I was incredibly lucky to attend a foodie event with my lovely Kavita, from over at Kavey Eats. Frankly, just spending time with Kavey is enough, but this time, we got to eat some extremely good food as well.

We met up as I was wandering along Regent’s Street, map in hand. I always turn the wrong way out of Oxford Circus tube station, without fail, even when I have done all the prep in the world. For once, and I suspect only this one time, I got it right, so Kavey ended up walking behind me for a bit before she realised it was me.

We found the venue, 51 Beak Street, with no problem, but we were early. Oops. The poor chap in charge of the venue was a bit flustered, and the chefs were running late, so we took ourselves out of his misery and found a coffee shop. A small hint for other coffee shops – do  not give a person who is a regular coffee drinker a cup that is 1/4 foam. They will only hand it back to you and ask you to top it up with the coffee that they have paid for. Very good coffee, I might add.

A pleasant half hour of nattering later, and we wandered back. Lo! People had arrived. Lots of people. I am remiss in not remembering everyone’s names, but to be honest, there were quite a few of them! I was also a bit busy ogling the venue and coveting it rather a lot. Oh you could do a very good Christmas in that place.

Once everyone has assembled, we were led down a very beautiful wooden spiral staircase by David. David is a partner in David Oliver Fine Foods, the company – and people – that we were there to meet.

Look what nice boys they are.

A country boy through and through, David admitted that they had underestimated the weight of London traffic, hence them being late. We all got settled into the various sofas and chairs, shivered a lot because it was a basement and quite cold, then Oliver bounced down the stairs and introduced himself.

They told us how they got started, where they had met, and how the idea for this range of dishes had come about. Primarily they are chefs, and passionate about getting this country to eat more game. I’m all for that. They have come at this from the angle of chefs wanting to get good food out there to people, not from a ‘Let’s make some money with merchandise!” angle and I found that very appealing.  Both men are lovely. Funny, personable and genuine in their passion to get people eating more game and why not? This country does it so well, and we do have an abundance of it.

Quite how they’ve found the time to develop this I’m really not sure, as they both have full time jobs – David’s a chef and Oliver runs his own catering company now – but they have found the time and I’m very glad that they have.

They were going to prepare one of the ready meal recipes from scratch for us, and also cook off one of the packed meals. Then we would get to blind taste and guess which one was which.

This was done with great skill, whilst talking to us animatedly about their business and plans for the future, plus telling us how Waitrose have gotten behind them and supported them every step of the way.

“So you’ve got no backing, no equipment and no money. Just this idea?”

“Okay then. We can run with that.”

After more discussion, and the agony of delicious smells coming from the kitchen, it was time to taste. Two plates were brought out, and we all took some. Both plates were absolutely delicious – smoked bacon and puy lentils are a very winning combination – and apart from some very spurious guesses, we admitted that we really couldn’t tell which was which. The quality of both was excellent.

Then it was back up the stairs to the main room, which had been transformed into a very elegant dining room. A long table, all beautifully set for lunch. We even had candles, napkins and two sets of cutlery. I couldn’t help thinking how lovely it would look set up for Christmas.

We took our places, and were served for the first course Rabbit with Courgettes, White Beans and Lemon.

Beautiful, juicy, meaty rabbit – which the boys still prep by hand – perfectly cooked beans, decent sized chunks of courgettes and a distinct taste of lemon. Most ready meals that promise lemon never deliver, unless it’s a actually a lemon pudding.

Perfect. I would be delighted with this for a dinner on an evening in alone.

Next in came the dish we had already tasted, Guinea Fowl with Puy Lentils and Smoked Bacon. I think it’s safe to say that we were more than happy to keep eating it! 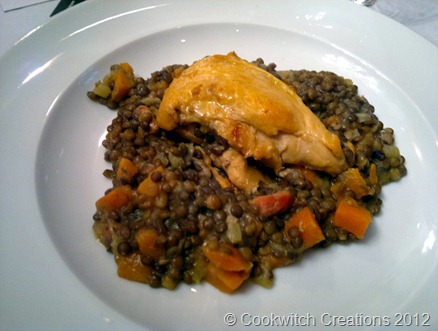 I think most of us came away more than impressed with the quality of these meals, and I for one will certainly be hunting them out the next time I am in Waitrose, or do an Ocado order.

We were given some meal to take home too, and I can report back that the Venison and Sweet Potato casserole is equally as stunning.

David Oliver Fine Food deserves to go from strength to strength, and I wish them all the very best.