First of all, let me explain, this is not a rendang at all, because that is usually a meat dish, but I have used a rendang spice paste in it, so just go with me on this.

Rendang is a spicy, dry meat dish which originated from Indonesia. Rendang is traditionally prepared by the Minangkabau community during festive occasions such as traditional ceremonies, wedding feasts and Eid al-Fitr, but it also made across the country. It has, along with the main meat ingredient, coconut milk mixed with a fragrant paste of ground spices and herbs, including ginger, galangal, turmeric leaves, lemongrass, garlic, shallots, chillis and other spices. The paste I had was shop bought, but the fragrance of lemon grass wafted out at me as soon as I opened the tub.

I’d had to empty out a can of chickpeas as I needed the liquid in it (known as aquafaba) for a vegan recipe. It’s a fabulous egg replacement. This left me with a whole can of chickpeas to use up, so I added some petit pois to it for greenery, and then went with the flow.

5 tbs ready fried onions (I often use these instead of fresh ones at the start of a dish. They work cooked too!)

1 pack of paneer, cut into cubes

Put the chickpeas and peas in a saucepan. Add maybe a tablespoon of vegetable oil and mix well.

Add in the onions, turmeric, cumin and coriander, plus the salt. Mix very well to coat.

Pour in the coconut milk, add 1 heaped tablespoon of the rendang paste, mix all around again so that the spices and the paste have been distributed properly, and leave to simmer on a very low heat while you fry off the paneer. I tasted it befire adding the paneer and added another tablespoon of the paste.

Add 1 tbs of vegetable oil to a frying pan.

Add the paneer cubes, mix to coat them in the oil and turn the heat on, medium low.

When they gain colour on one side, turn them over and get the other side golden brown too.

Add the cubes to the chickpea/coconut pan, simmer for half an hour so they soak in the flavours, and then serve over rice. Or just eat it out of the pan with a spoon… 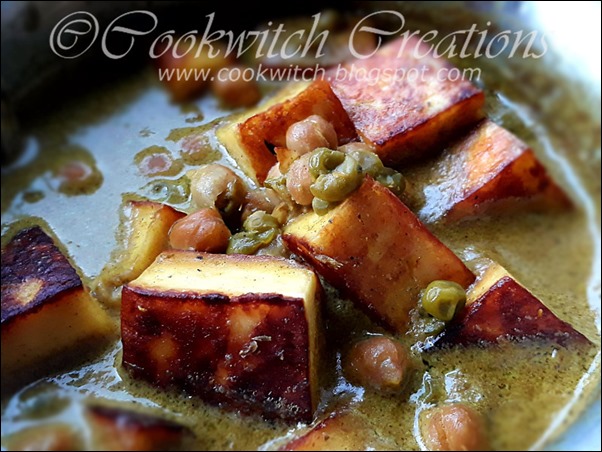