Kolokassi is a tuber of little renown in the UK. It’s also called Taro, and it used a lot in Asia, even for cake making, and is what they call poi in Hawaii, where it is a staple. I know it’s hard to find here, and I apologise in advance for that.

I freely admit that I used to really dislike this tuber as a child, mainly because It Was Not a Potato in various stews. I did eventually get over my dislike of this hairy, weird looking tuber. I mean, I know it’s not a potato, but it still has its place in the world. One day I was thinking about a recipe I had seen for celeriac shawarma, and was wondering how you’d go about that when I remembered I’d bought kolokassi and they needed to be used up. 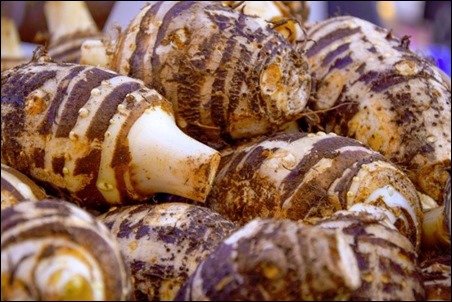 They are a little weird looking, I admit, but I have grown to love their creamy texture in bean casseroles now. Finally. It’s only taken me nearly 40 years…I’ve not tried it mashed, so maybe I’ll give that a try next time.

There are warnings about this particular foodstuff, so heed well.

DO NOT eat this raw. Not even a tiny taste just to see. It’s toxic due to its calcium oxalate content. (Calcium oxalate is associated with gout and kidney stones). It’s also not very tasty unless you cook it.

It can cause irritation to the skin for some, so wear gloves when you prep it, or do as I do and hold it with a paper towel whilst peeling it with one of those Y shaped vegetable peelers. Don’t wash it, as it will get a bit slimy.

Some recipes say not to slice it, but to crack it. You slice in a small way then twist the knife to crack a piece away from the main tuber. I have just sliced it in the past with no problems though so do what you feel. I did crack it into chunks with a knife rather than slice it this time, so I got a quite fibrous end to the pieces, which is what I wanted as I wanted it to look a bit meaty on the skewers. I thought for some time about what spices to use, but then realized I was overthinking, so went with the ones I know to be used a fair bit in Cyprus. Cumin and cinnamon together make a lovely marinade all on their own, so you could just use those if you like.

2 large (6”-8” in length) kolokasi, peeled and cracked or chopped into chunks

Bamboo skewers, soaked in water for an hour. (stops them burning)

Put the kolokasi in a bowl, add the olive oil and stir well to coat.

Add in all the spices and herbs, mix really well, and leave to sit and marinate for an hour.

I then threaded them on to skewers, but you honestly don’t have to. I was being Arty.

Place them in a roasting tin with sides, pour over any spiced oil left in the bowl. Yes it is a lot, but you will need it to baste the chunks.

Roast at 170C fan for 40 minutes, basting and turning to make sure they don’t stick.

At the end of 40 minutes, test them to make sure they are cooked all the way through. Poke them with a skewer, and if there is still resistance in the centre, put them back in for another 10 minutes.

Switch the oven to grill, and turn it up to 200C. You want slightly charred edges if you can. Baste again to get all the spiced oil onto it.

Serve it wrapped in a warmed pita bread, with lots of salad. Or just eat it right off the skewer… 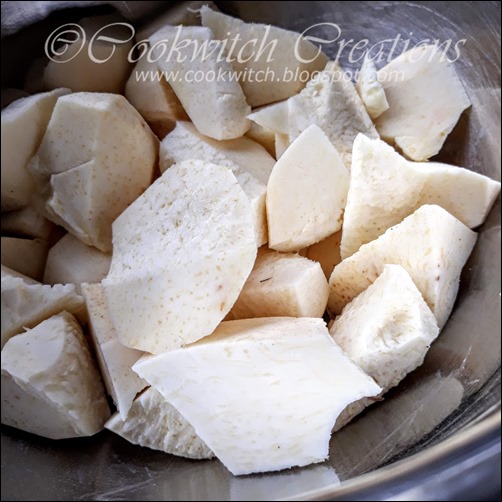 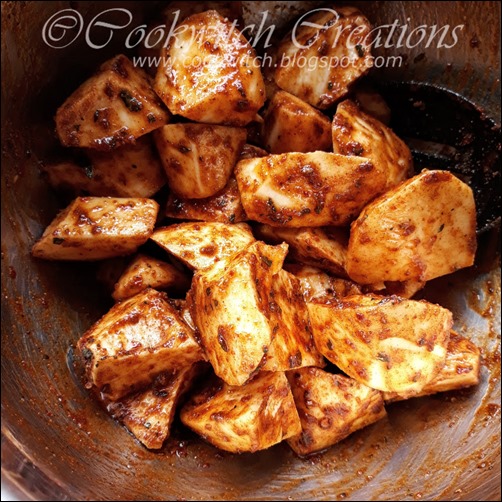 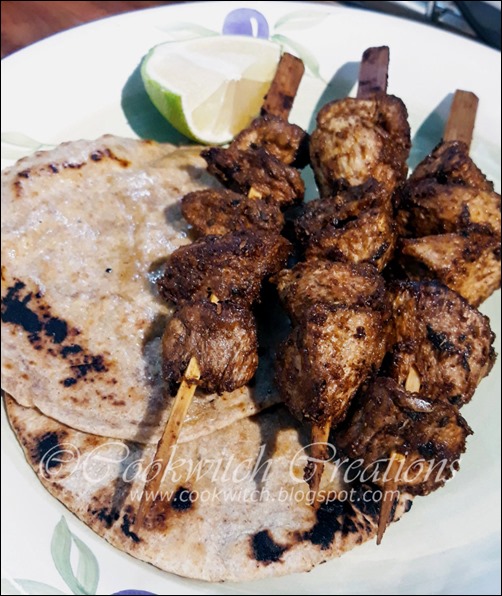