The things I do for my colleagues.

Ed mentioned that when he’d been on holiday in Croatia, he’d had this gorgeous dip made of aubergines and red peppers, and was bemoaning the fact that he hadn’t been able to find it since. I was pretty sure I’d be able to find a recipe, and I knew I had peppers and aubergines, so that was my task for the weekend all set.

Ajvar ([ǎj.ʋaːr], Serbian Cyrillic: ajвар; Bulgarian: aйвар; Macedonian: aјвар) is a pepper-based condiment made principally from red bell peppers. It may also contain garlic, eggplant and chili peppers. Ajvar is used in the Balkans in Albanian, Bosnian, Bulgarian, Croatian, Gottscheerich, Macedonian, Serbian, and Slovenian cuisine. In Serbia, it was long known as “Serbian salad”[1] or “Serbian vegetable caviar”.[2] It became a popular side dish throughout ex-Yugoslavia after World War II and is nowadays popular in Southeastern Europe.

Homemade ajvar is made of roasted or cooked peppers. Depending on the capsaicin content in bell peppers and the amount of added chili peppers, it can be sweet (traditional), piquant (the most common), or very hot (ljutenica). Ajvar can be consumed as a bread spread or as a side dish. If it contains tomato, then it is called pindjur.

The charring of the vegetables – especially the aubergines – gives a gentle smoky back note, so to me that’s a non negotiable part of this recipe. Of course you can bake them in the oven, but I’d suggest blasting them under the grill, too, to get the char. (You can actually buy pre smoked, skinned aubergine in jars in many Turkish supermarkets, look for the jars marked patliçan. It doesn’t look terribly appetising but oh the taste…)

There do seem to be as many ways to make this as there are people who make it, so in the end after lots of internet reading, this is they way I did it. Colleague ate the whole lot in one sitting, so I think it worked! I didn’t add hot peppers to mine, as I don’t like much heat, and colleague hadn’t specified. Better to err on the side of caution.

5 red peppers (I used a mix of bell and pointed)

I put the aubergines on a gas flame diffuser, as it gives them a steady platform to char. They do have a tendency to roll about, otherwise.

I balanced a couple of peppers on there too, and then got out The Blowtorch.

Yes, I was serious about getting that smoky, charred taste. Plus, it’s fun! It’s a blowtorch! Okay so maybe not everyone blowtorches peppers at 0800 on a Sunday morning, but it had been a hard weekend and fire made it all better.

Once they all had a good level of char all over, I put them in the oven with the whole bulb of garlic, drizzle the lot with a bit of olive oil, and cook them down until the garlic was soft enough to squeeze out of its casing.

I tipped the whole lot into a bowl, and put cling film over, then left them to cool down.

Once they were cool enough to handle, I scraped the flesh out of the aubergines, and took the seeds out of the peppers. Yes some of the charred aubergine skin got in, but hey ho. It all adds to the taste.

I did not peel the peppers, as they were all going to go into a food processor anyway, along with the softened garlic, and get blitzed to a smooth pulp.

Then the vinegar went in, and instantly the smell changed to the one I was familiar with, from when I’ve bought jars of ajvar from my local Turkish shop.

I tasted it, added a little more salt, and another tablespoon of oil, then called it done.

Into two small airtight Tupperware boxes it went, and into the fridge to sit for a few days.

Cue one very happy colleague, which was my aim. It was a pleasure to watch him dig right in with a crusty baguette. 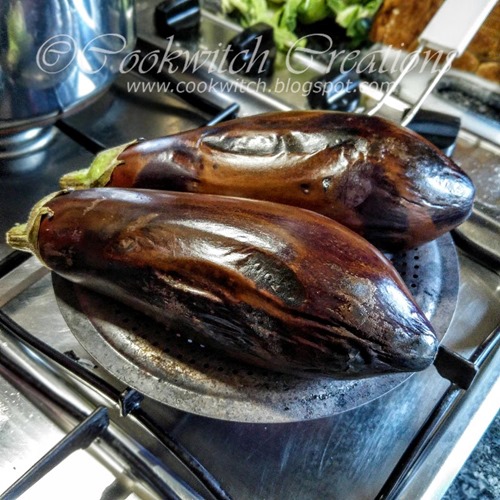 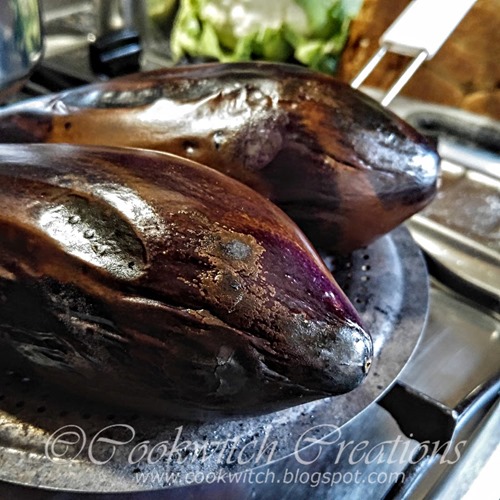 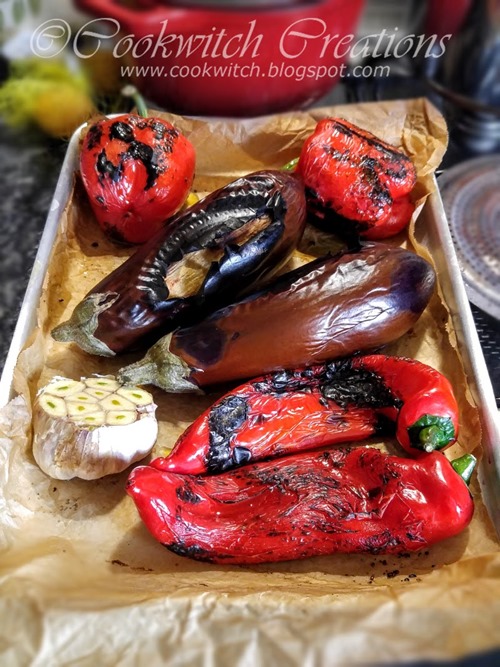 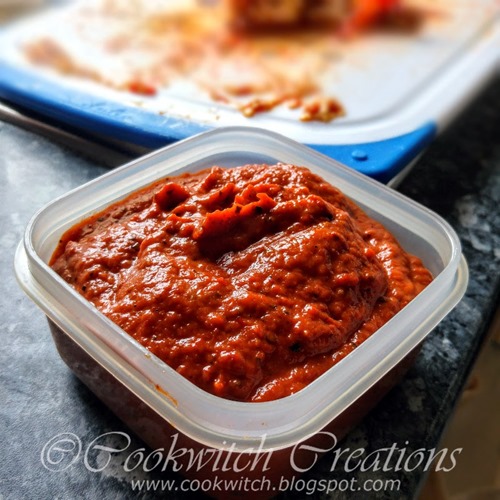