I’m not a pastry maker. More of an eater, for sure, but making it and deploying it seems to be one of life’s mental blocks. Discovering you can make it in a food processor made the Making easier, but the deployment? I’m still pretty cack-handed.

This is never going to be me.

However, I have finally succeeded in making pastry that’s edible, not reminiscent of dwarf bread, and crisply short.

Thank you, Jamie Oliver, for this recipe.

I made it in the food processor, adding 1 tsp vanilla extract to it, and watched in wonder as it all came together in a pale gold ball. I it wrapped in cling film and put in the fridge to rest.

While that was resting, I made a frangipane filling. Tex loves bakewell tarts, so I wanted something along those lines. For that I turned to Mary Berry.

Rolling the pastry out is usually where it goes wrong. This one was very well behaved but the edges seemed to crack a bit. No matter. It draped into my new fluted Le Creuset pie dish nicely. (Thank you Karen!)

I did the rolling pin over the top thing,. but that just seemed to squash the pastry rather than cut it. I expect the pie dish’s sides are too thick.

Put baking parchment in, (I scrunched it up foist so that it was more malleable)filled with lentils and baked blind for 15 minutes, then removed the lentils and baked for another 15. That SHOULD have been another 5, but I misread the recipe because I was over-excited.

It still came out very nicely. A bit brown, but tasty. 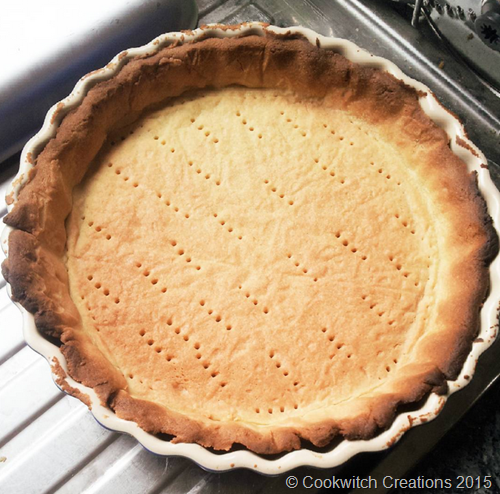 I spread spiced apple butter over the cooled base, filled it with the frangipane, angsted that there wasn’t enough and baked it anyway.

The offcuts were made into 2 small tart shells, baked in a Lakeland perforated silicone mould then filled with fresh cherries and more frangipane.

Definitely one to make again! Judging by Tex’s reaction, this may be one that doesn’t get taken to work to share out… 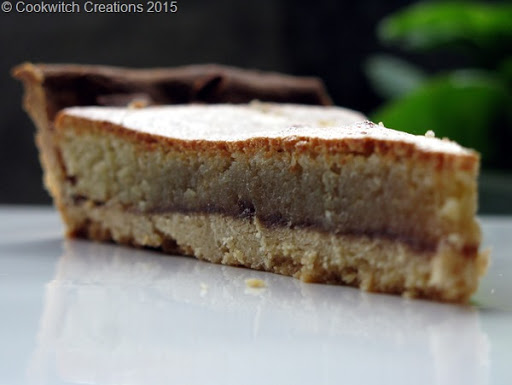 One thought on “Pastry, Baking Blind and a Nice Big Tart”