It’s the only name I could give it, to be honest, as the ideas in my head ranged from Moroccan to Persian to Turkish to Greek all in one morning and I think I eventually shoved in everything I had, apart from the things that wouldn’t actually fit in the pot.

I started out, as I often do when I need inspiration, in the local Turkish grocer, eyeing up what vegetables they had. I’d already got aubergines, which I’d planned to bake with white miso as my husband was going to be away (he doesn’t like the smell of miso), but then it turned out that he wasn’t going to be away after all so I needed to plan something else for my dinner.

It’s hard not to buy everything they have as it’s all so good, but I tried very hard not to, and then I spotted some lovely looking leeks, so thought of the braised leeks from Istanbul And Beyond, and then there were big boxes of fresh herbs as I went past the leeks. The mint looked and smelled so good, that had to come home with me so it went in to the basket. Mint in a vegetable stew adds such a delicious back note that people often can’t define, and I’ve become quite addicted to using it that way. Try it in a green bean, garlic and tomato braise, it’s delicious.

Then I recalled Olia Hercules singing the praises of dill, so thought it was time I got over my dislike of that delicately frondy herb. Maybe using it as a vegetable not as a fresh herb might do the trick.  In it went. Parsley adds a lemony freshness, and lots of colour, so that came home with me too.  There is something so…Mediterranean about wandering home with big bunches of fresh herbs sticking out of your bag.

Once I got home, winging it as I was, I first had a Moroccan tagine in my head, heady with cinnamon and fruit, then a Persian stew, with the big, bold green flavours in there that come from entire bunches of herbs. I recalled the Turkish lamb and leek braise which I’d loved, but I just didn’t want meat, and pondered about Greek green beans and tomatoes and feta. It gets busy in the cooking part of my brain!  I just started with the aubergines in the end, and then made it up from there as I went along.

You will need a large frying pan, and a large capacity pot for this. My casserole dish holds 4 litres.

2 medium aubergines, cut in half lengthways and then cut across into large chunks

Pop the aubergine chunks into a large frying pan, but with no oil initially, just a light sprinkle of salt.

Cook them on a medium heat, to get some colour on the cut sides. Add a touch of oil on a cube it starts to stick.

Once all the sides have some good colour, pop them into a large casserole dish.

Add the tomato paste and red pepper paste to the frying pan, with 1 tbs olive oil.

Stir and fry the pastes for about 5 minutes, it intensifies their flavours.

Stir in the leeks and coat well with the pastes, then add them to the casserole pot too.

Pour in the tin of drained chickpeas, then the chopped tomatoes along with their juice, then add that can full of water.

Tuck in a veggie stock cube.

Add the carrot and large chunks of potato, then it the water level needs raising to cover it all, do so now.

Mix it all really well, and leave it to simmer, covered, for about an hour or two, stirring every so often to make sure the stock cube has dissolved.

Once all the vegetables are tender, chop up all the herbs, holding a little bit of each back for later, and add them in too.

Add a good 2-3 tablespoons of olive oil, which enriches the juices, and stir again.

Cover and cook on the lowest heat you can for another 2 hours, then simmer uncovered, until the liquid level has reduced down by about a centimetre or two and the colour has darkened. You want it more like a stew than a soup.

Taste it, and see if you think it needs more salt or chilli for your taste.

I served mine with bulghur wheat as rice fills me up way too fast.

Enough water to cover the wheat by 1 cm

Put the bulghur in a pan or bowl.

Stir in the salt, and the paste.

Add the water, and keep mixing the paste in.

I microwaved mine in a jug for 2 minutes, then let it sit with the cling film on for 10 minutes.

It looked a bit dry, so I added 2 tbs of water, and stirred in the dill.

Microwaved for another minute, and let it sit, covered, until I was ready to serve it up.

I piled the stew over the bulghur, and added more chopped herbs, plus a little olive oil and plain Greek yoghurt. 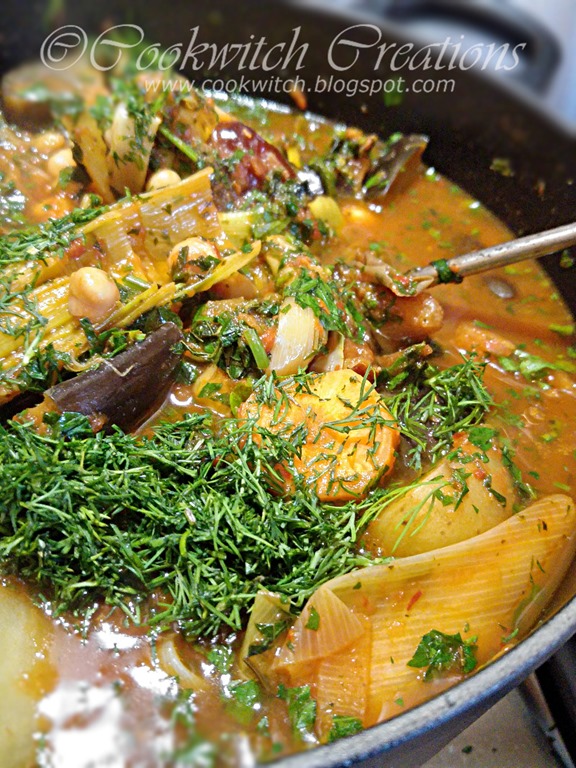 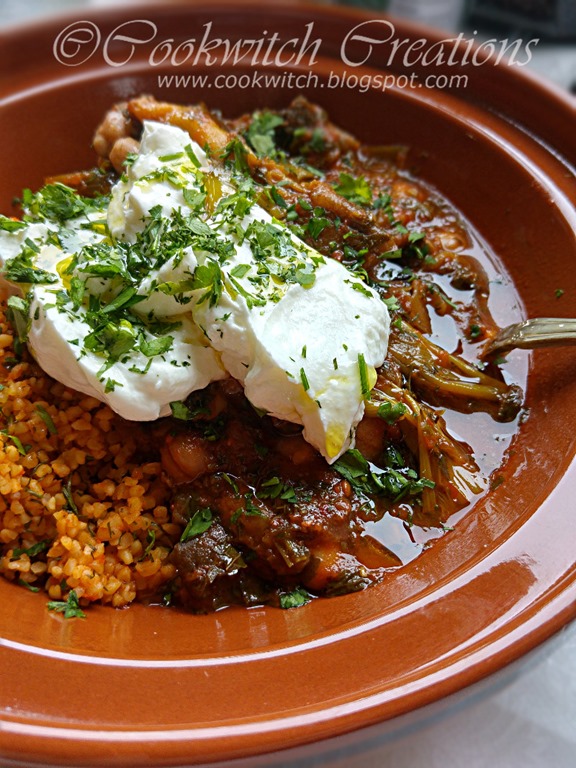