I am not a fan of food waste, I never have been. I think it stems from being the slop bin monitor in the school dinner hall. It was our job to scrape off the uneaten food from the plates into  a huge bin, and I think it shocked me to the core to see how much was thrown away, lots of it untouched, so I tried never to waste food, if I can use it in some way.

I cooked a haggis for Burns’ night, and there’s always leftovers as it is such a filling thing. I know many people pull faces at it, but oh my, it is delicious. It’s like an oversized, very savoury sausage, but one where you don’t eat the skin, you just spoon out the insides and serve them with mashed potatoes, swede and gravy, like savoury mince. I’d eat it way more often than I do, if I could buy it more easily.

On this occasion we did rather well, and only had a few spoons of mash and haggis leftover, but I was not to be thwarted, despite there only being a small amount.

I had bacon. Bacon makes everything better. I had bought some Scotch rolls in the Co-op on the way home, as I knew I could use them up for the following night’s tea.

Cook the bacon in a dry frying pan until crisped on both sides. Set aside to drain on kitchen paper.

Mix the leftover mash and haggis together very well. You have to squish it together properly so that it holds its shape, when you form it into a burger.

Heat the frying pan and bacon juices up again, place the patty down onto the pan, and leave it alone. You want to cook it enough so that it forms a good solid crust.

Turn it over in one swift movement when the crust is nicely dark brown.

When both sides are brown, set aside with the bacon.

Put the leftover gravy into the pan, whisk in 1 level tbs plain flour and keep stirring and heating until it’s very thick. You can tip off any excess oil if you like.

Spread both sides of the roll with the gravy, place the patty on the bottom half, top with the bacon, pop the lid on, and devour. 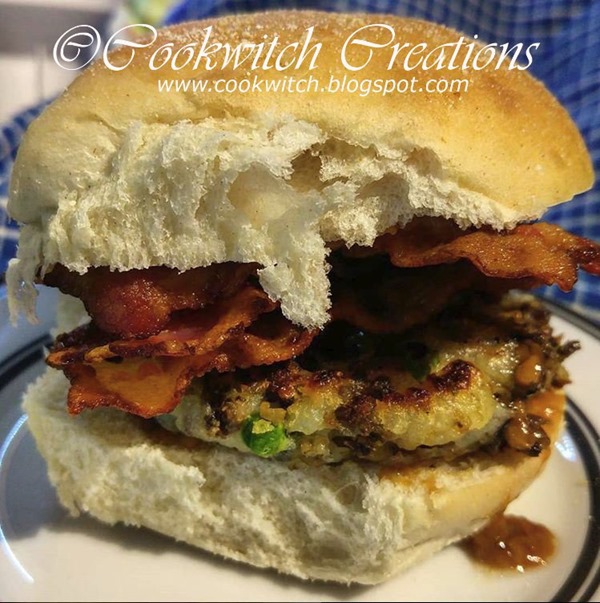