This is, yet again, a Nigel Slater recipe. Yes, I have a soft spot for this particular TV cook (he insists he is a cook, not a chef) and pretty much everything of his that I have tried, works. I know he cannot lay claim to soda bread, because that has existed for many years already, but he can lay claim to bringing it back into the public gaze.
In these days of off the shelf breads that are made by something called the Chorleywood process, it makes a fabulous change to have something tactile, something almost earthy, to sink your teeth into. Something that you made yourself, with an absolute minimum of fuss, but with maximum flavour.
I have tried sourdough, with mixed results, and I will be trying that again, even if only to prove to myself that it can’t be as difficult as it seems and that I just need to persevere.

But today I wanted ‘instant’ gratification. The kind of bread that you tear a hunk off and dip into soup, or eat stickily spread with honey, or a good jam. I didn’t want to wait. I also needed to make use of the bag of wholemeal Spelt flour that had been languishing in my baking cupboard, and I think this recipe did me proud. Thank you Mr Slater. Yet again.
The recipe and back story, is from here:
http://www.guardian.co.uk/lifeandstyle/2008/apr/06/recipes.foodanddrink
As is my usual way, I changed the recipe a little, to fit with what I had.
250g Wholemeal spelt flour
200g plain white flour
1 tsp sugar
1/2 tsp sea salt
1 tsp bicarbonate of soda
350ml Tim’s Dairy Greek yoghurt (plain) with about 3 tbs water added to make it thinner

Put a casserole pot (I used my earthenware Le Creuset Christmas present!) and its lid into the oven. I do have a cast iron pot as well, but that seemed too big for this recipe.

Mix the flours, sea salt, sugar and bicarbonate of soda together in a large bowl, pour in the liquid, and then mix it all together with a butter knife.

Knead it for a bit, add a little more flour if it’s too sticky and then flatten it to about 4cm high.

The next bit was removing the pan from the oven, and dusting the inside of the pan lightly with flour. The flour starts to toast and smells fabulous.

I managed to  lower in the dough without burning myself, which I counted as a win, then snipped a cross into the top with a pair of scissors.

Back on with the lid and put the dish back into the oven.

The bread should be ready after 25 minutes though mine took about 5-10 minutes longer. The smell of the loaf baking really is gorgeous, especially as you have the flour on the bottom of the pan toasting in there too.

Remove from the oven and leave in place for 5 minutes before turning out and leaving to cool slightly before eating.

That’s the pot I used to cook it in, underneath the loaf. 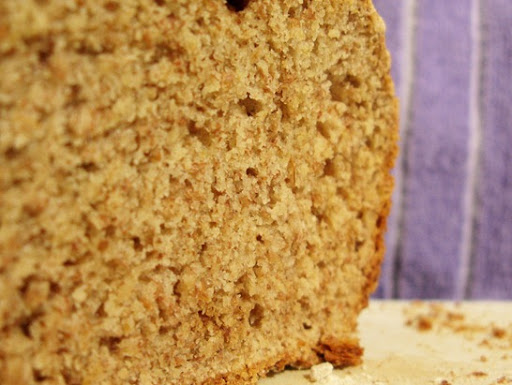 It has a lovely, crisp crust and a very tender inside. The crumb looks dense, but it isn’t heavy at all. Looks like another one to add to the Make Again list!

I simply had to make this again, but this time with variations.

Put the soft muscovado sugar into the yoghurt and leave to sit for 1/2 an hour then stir well.

Mix flours, salt, bicarb together along with the 1 tsp Demerara sugar (I mix with a wire whisk to get any lumps out)

Pout the yoghurt mixture in, add the sultanas and mix to a slightly sticky dough.

Cook as above. Again, it took longer. About35 minutes.

It has a softer crust, but a gorgeous almost malty flavour. 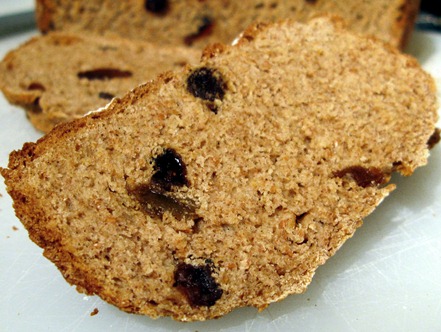