I think it’s fair to say that we do like a nice bit of beef in this house. There is a certain fascination with barbecue as well, as the first time that No 1 Husband and I visited the States, we went to a fabulous smoke house in Portsmouth, New England called the Muddy River Smokehouse. This piece of our history is no longer there, which I find very sad, because it served the best barbecue food I have ever eaten, including quite possibly the biggest beef ribs I have ever seen, which were partnered with two other racks of pork ribs. As a starter,  people, a starter.

Since then, we have always been on the look out for places that can duplicate what we ate there, and also there has been the never ending try-outs of what we can cook at home. Thanks to watching many episodes of Man vs. Food, Tex has a hankering for slow cooked smoked brisket, but we haven’t managed that one yet. I’m sure we will one day though.

I’m always on the lookout for beef ribs. Many butchers don’t carry them, and the silly supermarkets certainly don’t, but I am ever hopeful that one day I will find them. I know I can order them online, but I always forget.

Boss No 2 told me last week of an excellent butcher’s shop near my work and so I headed there to see what they had. What I found was a mecca to meat. I thought I had died and gone to heaven.

This is the sort of treasure trove that I could browse for hours, were it not for the fact that the shop itself is tiny. There’s barely room for three customers at once, so we all have to do a bit of good natured shuffling around. I might ask if I can go in there with a camera at some point, because the sheer amount of stock can’t be described adequately enough in words.

Having already purchase some steak and a French chicken and found them excellent, I decided to go back and see what else I could get my paws on. That’s when I saw them.

Not the big brontosaurus-like ribs from the smokehouse, but thick, chunky, massive cubes of meat and bone. £6 a kilo? Mine.

I brought them home on Thursday, and put them in the fridge until I decided what to do with them.

I’d cooked rib-eye steak for dinner, and was eyeing the juices left in the pan when I thought of searing off the ribs in the juices, and then slow cooking them, so I looked up a few recipes for slow cooker ribs and found one that appealed. I had all the ingredients, so off I went.

This is the original recipe: http://southernfood.about.com/od/beefribs/r/r91118a.htm

The photos that follow are just camera-phone shots so they are a bit rubbish, but you’ll get the idea I’m sure.

The ribs set free, and a piece of rib-eye ready to go on the griddle.

The ribs coated in smoked Spanish paprika, being seared off in the pan juices. 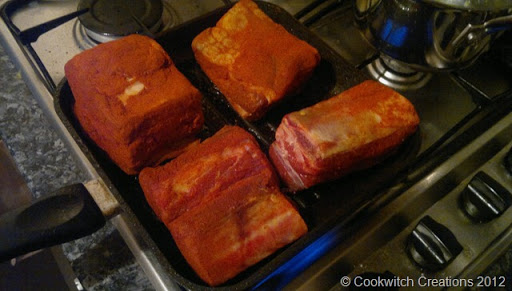 The ribs placed haphazardly in the bowl of the slow cooker.

Ribs again, bathed in sauce and with added chopped onion.

Not the best looking dish, but oh the SMELL.

1/2 cup apple juice and 1/2 cup bottled barbecue sauce. (I used Cooper’s Ale bbq sauce and rinsed the bottle out with the apple juice so I could get all the sauce)

Cover and cook on low overnight.

It went on at 11pm, and I turned it off at 8am, then left the meat to cool in the juices.

For dinner I lifted out the ribs carefully, placed in a roasting dish with some of the sauce, and cooked in the oven at 170C for about 1/2 an hour to heat through.

Served with coleslaw and potato salad.

As I lifted the meat out with tongs, the bones fell straight out.

It was a very nice dinner indeed.

The leftover sauce isn’t going to waste though, I’m cooking a few tins of white and borlotti beans in it overnight to see how they turn out. Waste not want not!

Edited to add photo of beans!

The smell this morning was amazing. Here is the final result.